May 5th, 2013  |  Development Center of AthTek Software
————
We have just release a new software – Free Voice Changer. If you have ever dreamed to have a voice changing machine, this freeware is for you. It can change your voice pitch to be male or female accent effortlessly. If you have ever used other voice changers, you would probably know that most of them will disable your original audio drive and replace it will their audio drives. This means your audio drive will be lost if you uninstall those kinds of voice changers someday. AthTek Free Voice Changer plays just as a funny sound tool on your desktop. It won’t modify anything of your original audio drive. That’s why it is a stable choice for PC users. And at least, it is FREE. 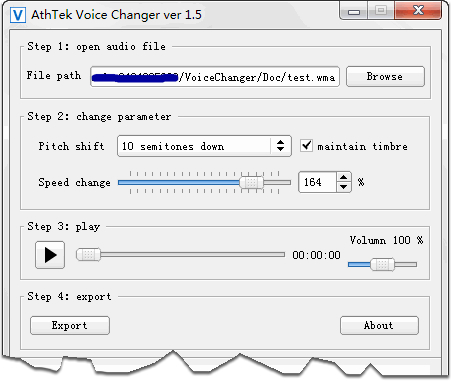 Key Features:
* Totally free for lifetime;
Forget the voice changers which will charge from your pocket. AthTek Voice Changer is FREE for LIFETIME!

* Easy to use;
It has a simple and clean interface. It has listed all the 4 steps for you to get the sound effects in seconds.

* Won’t replace the audio drive;
As I have mentioned, it won’t take place your previous audio settings as what other voice changers will do.

* Clean interface;
It has no complex dashboard which you have to learn before you can use. It just has one simple interface which you can get started to use instantly.

* Exportable sound effects;
It supports to export the sound with effects in *.wav format.

* 22 semitones and 2 octaves voice pitch supported;
Which will enables you to change the voice pitch to be male or female tendency effortlessly.

* Changeable speed of voice;
It also supports to change your voice speed flexibly.

* Supports to maintain the timbre;
Even your voice pitch has been changed from male to female tendency extremely, you can still keep your own timbre.

* Sound effects preview supported;
You can preview the sound effects at any time you wish, until you decide to export it.

* Compatible with Windows XP, Vista, 7 and Windows 8;
Most of the home PCs can use this free voice changer.

* Less system requirements.
It doesn’t need high level devices of your PC, even it has no special requirements to audio device.