[PDF] The Windows Registry is a hierarchical database that stores configuration settings and options on Microsoft Windows operating systems. It contains settings for low-level operating system components and for applications running on the platform that have opted to use the registry. The kernel, device drivers, services, SAM, user interface and third party applications can all make use of the registry. The registry also provides a means to access counters for profiling system performance. The Windows Registry has a structure similar to Windows folders and files. Each main folder is named as a Hive. Do you know what does each hive mean? In this article, you will read the general introduction to Windows registry hives.

COM (Component Object Model) is Microsoft’s component software architecture developed primarily for Windows. It is the foundation upon which OLE and ActiveX are based, and provides a means to re-use code without requiring re-compilation. In COM, a component is a platform-specific binary file that compliant applications and other components can utilize. Programs incorporating a component’s services never have access to its internal data structure, but instead include pointers to its standardized interface. Thus, it is possible for components to interact with each other regardless of how they work or what language they are written in. ActiveX, OLE/COM produces many registry problems on Windows system.

Application Paths are used for storing keys and values of Windows applications. If some application ceases to work on your Windows, you can clean and optimize this registry hive to fix the application problem. 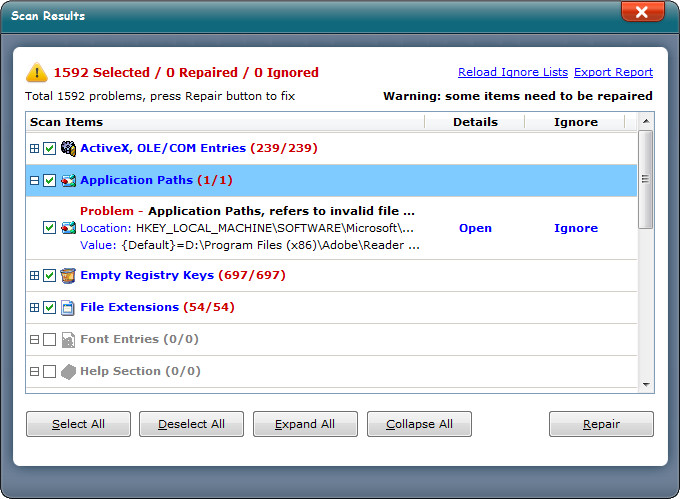 Empty Registry keys are when a program of software has made a ‘folder’ and either never filled it with contents or has been uninstalled and the ‘folder’ remains but has no contents. They are harmless. Just take up a little space. It might also slow down certain processes if there are too many empty and useless keys. No matter what registry cleanup tool you are using, empty registry keys will certainly be removed in registry cleaning.