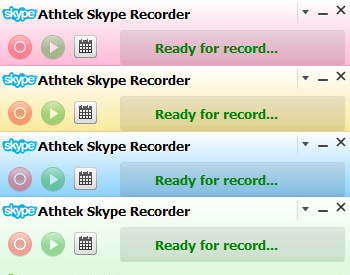 Just like the above image, the new lite version can change colors as you wish. It has removed some seldom used functions and made itself focus on private Skype call recording. The same as the previous version of AthTek Skype Recorder, it is able to record Skype conversations with high quality audio files on both side.

I always said that the development team of AthTek Skype Recorder like donkeys. If you don’t push, push, push and push them again, they will never run. Actually they are the laziest development team I have ever met. Unfortunately, they are my fellows; fortunately, I love them. Anyway, the new released lite version may not to your aethestic standard. Please do not hesitate to criticize it, and I will push and push to let the lazy donkeys run to optimize it. Maybe it will take a long time to collect all your feedback, but finally your demand will come true.