Skype Call Recorder Has Been Updated to V4.2 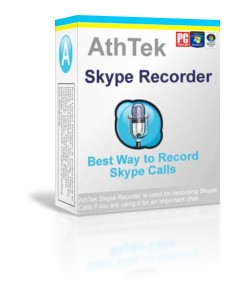 In the new released version, AthTek Skype Recorder add a lot of functions to itself.

1. Add new language – Japanese. As many of our customers are from Japan, we include Japanese into AthTek Skype Recorder. Maybe there were still many misspelled words existing in this program, but still can help Japanese users to record Skype calls with it.

2. Support offline recording. As we all know that AthTek Skype Recorder is good at online calls recording. And we still think about the offline recording function, maybe it will be helpful to some of our users. With this function, you can record any sound (line in) through your computer. That means, AthTek Skype Recorder can not only record Skype calls, but also record sound by the micphone.

7. Support drag-and-drop. In the new Skype Recorder, it supports to drag and drop the recordings to media player or explorer. It can be used as a backup file or shortcut to play the recordings. Maybe useful in some conditions.